Tonight we played a round of Dread. The players were members of the President's entourage and other hangers-on chilling at Camp David. We had President Hellmutt, who had blatantly stolen the election and built a stained-glass fallout shelter at Camp David. There was his not-so-secret lover the hippie Sunshine Happiblossom, who was an activist for men's rights and a hater of all things Guatemalan. Unfortunately for her, we also had Guatemalan ambassador Sylvia Contreras-Ayala, who hoped to retire from politics to become CEO of the United Fruit Company. There was journalist Drake Johnson, who was a secret communist spy, as was Ruth Gilberg, a CIA agent under cover as a janitor. And finally we had General Prescott Wainwright, who believed strongly in getting Americans to produce as many children as possible for cannon fodder. 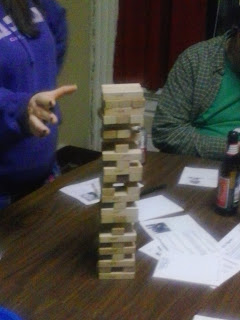 Our story began with the President and the General having a beer in the stained glass fallout shelter and discussing this comm-u-nism thing that the President didn't really understand. The President was getting well and truly sloshed when a marine ran in to tell him that there was a call for him from Admiral Birkbickler on the red phone in the command center. The President and General rushed to the phone, with the CIA agent and Ambassador both disguised as cleaning staff following. The Admiral informed them that he had just gotten word that Soviet submarines bearing nuclear warheads were within striking distance of New York, New Orleans, San Francisco, Honolulu, and -- the phone line was cut before he could tell the President the last city being threatened. The President drunkenly marked the cities on a wall map, putting the marks in wildly inaccurate locations (such as Fargo, ND).

The other characters were waiting outside, where they saw a helicopter painted with a hammer and sickle land in the grass. Three Soviet soldiers and an older man in a suit emerged. The older man declared himself to be the Soviet Premier, here to demand the unconditional surrender of the United States. He explained that he had cut all communication lines out of Camp David, except for the enormous satellite phone that he carried with him. If the captains of the nuclear submarines didn't get a call from him with a secret code phrase in five hours, they had orders to nuke their respective target cities. The CIA agent pulled out a gun and shot the helicopter's fuel tank, causing it to explode -- but remained hidden so nobody else knew she was the one responsible.

After some back and forth, the President and General agreed to meet with the Premier at the stained glass fallout shelter. The Ambassador managed to grab the satellite phone from the Soviets to try to call for a Guatemalan helicopter to come rescue her. All of the Soviet soldiers turned their guns on her, at which point the General ordered the US marines to fire on the Soviets and ducked behind the beer fridge. The President also pulled out a gun. The three Soviet soldiers were killed. The CIA agent (being a commie traitor) took a shot at the president, wounding him in the head. The Hippie rushed to help him. The marines took the phone from the Ambassador and gave it to the General, who called Washington and ordered a preemptive nuclear strike on Russia.

At this point a backup Soviet helicopter, having seen the wreckage of the first one, landed, and four soldiers got out. The Premier rushed to the safety of his newly arrived comrades. The Journalist grabbed the phone and tried to call his communist contacts to let them know about the American nuclear strike, but the marines interrupted him. Luckily for the Reds, the CIA agent was able to dive into the meelee and complete the call. The marines seized her and locked her in a broom closet, while the Journalist fled to the Soviet helicopter. In the commotion, a stray bullet from one of the marines killed the General. The CIA agent used her knowledge of the fallout shelter's secret passageways to escape through a ventilation duct.

Meanwhile, the President rushed outside and took a shot at the Premier. It hit him, and the Soviet soldiers rushed his unmoving body onto the helicopter. The Journalist convinced the Soviets to wait a few minutes so that the CIA agent could join them, since she was a communist too.

The Ambassador now showed up with an army of cleaning staff, gardeners, and other common people who were around at Camp David. They took the satellite phone and made a series of calls to the cleaning staff at the three US missile bases and five Soviet nuclear submarines, telling them to disarm the warheads. (In terms of game mechanics, this required the Ambassador to make eight separate pulls from the tower.)

With the world now saved, the Hippie decided to take out the two leaders who had gotten us into this mess. She grabbed the President's gun and shot him (giving him a nice symmetrical wound to the one he got from the CIA agent). She charged the Soviet helicopter, hoping to finish off the Premier, but was killed by the Soviet soldiers.

In the end, the two traitors got away in the Soviet helicopter, the Ambassador became a major union organizer in Guatemala, and the President survived impeachment but lost his reelection campaign. And the mystery city really was Fargo, ND.

Here's a file with the player questionnaires if you'd like to play a Cold War Dread game.