Luke Laurie has a useful post listing some strategies that game designers can use to cut down on "analysis paralysis" -- the tendency of players to take inordinate amounts of time to make decisions, slowing down the game. I thin Laurie's list of 10 specific strategies can be lumped into two basic approaches: reduce cognitive barriers and reduce incentives to continue investing congitive effort. The "reduce cognitive barriers" lump includes things like separating phases for different actions and reducing visual clutter. These strategies help players' brains process relevant information faster and more easily. The "reduce incentives to continue investing cognitive effort" lump involves things like randomizing outcomes that make it impossible or worthless to game out long chains of consequences and counter-moves. 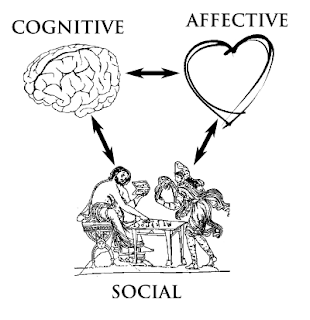 The word "cognitive" appears in both of my (inelegant) labels above because Laurie's approach is basically cognitive. That is, he treats players as basically rational agents trying to maximize their achievement of a goal (winning the game), under constraints posed by the game itself and their own mental shortcomings. This is certainly a huge part what board games are about! Strategizing to win is at the heart of what draws most players to gaming.

Nevertheless, games also have affective (feelings) and social aspects too. Consider Arkham Horror, featured in the last photo in Laurie's post. There's a lot of strategy that goes into playing Arkham Horror. But people play it just as much for the feeling -- to experience the horror and madness of a Lovecraftian world. And board games are usually a social activity, to be played with and against other players rather than just solitaire or against a computer AI. I've found that analysis paralysis can vary greatly with the social dynamic of the game. For example, one of my early plays of Alien Frontiers was with a group especially prone to analysis paralysis, so the game dragged on forever. I nearly swore off it, but in subsequent plays with a different crowd it flowed smoothly. So I think that in addition to the cognitive solutions to analysis paralysis that Laurie proposes, there are also solutions to be found in the affective and social realms too. I can't claim to have an exhaustive list, so I'll just focus on one.

Laurie's last suggestion is to create simultaneous actions. On a mechanical level, this can speed up a game by letting multiple players do their analysis at the same time rather than having to wait to do them one after the other. But I have found that it also exerts beneficial social forces. On the one hand, there is social pressure on slower players to make a decision, because the whole group is waiting to do something together. On the other hand, it reduces the scrutiny directed at one player by the others who are waiting for their own turns. Together, these two forces push players to get to the point. Seven Wonders makes a good example of this. Nobody wants to be the person holding up the round by taking too long to pick their card, but you also have some breathing room to think while other people pick their cards. I use a similar approach in Bunny Money Gunny, as players pick their card order simultaneously then reveal them simultaneously. In playtests, slower players are swept along socially to avoid analysis paralysis.