In addition to our major publications, we have made a bunch of smaller games. Most of them are available for free or pay-what-you-want. 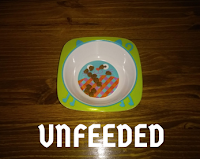 You are a cat. It has been hours since you were last given any cat food. The people are not responding to your cries. You are going to starve and die -- all alone and unfeeded.

Unfeeded is a single-player game. To play, you will need one standard deck of cards, one six-sided die, five tokens, and some method for recording your story.


Wizards in a Van 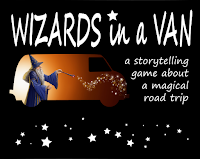 You are a group of wizards on a road trip. You all have magical powers, though they may not always work as intended. You are traveling in a van, because that is how wizards like to travel.


To play Wizards in a Van, you will need 2-5 players (including yourself), a handful of six-sided dice (or an online dice roller), and some small slips of paper or index cards and pencils (or a shared online document). 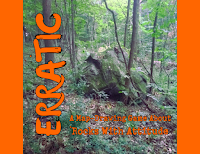 Millennia ago, the Great Progenitor came out of the farthest north in the form of a sheet of ice. You were a rock, living happily in your place of origin, until the Great Progenitor called you forth for a new and essential duty. Southward the ice ran, bringing you to new lands, until finally the heat of the sun broke the Great Progenitor’s advance. The ice melted, and you were left behind on a land scraped clean and ready for a new beginning. The [four/three/two] of you are the Sentinels, charged with looking over this place as it grows and changes. Though you cannot move, your consciousness stretches out over the land, and any who choose to listen -- animate or inanimate -- can hear your wisdom.

Erratic is a map-drawing game for two to four players. You will need a large piece of paper, a deck of playing cards, and a small rock for each player. 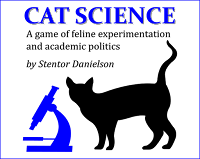 Cat Science is a storytelling game about cats conducting experiments to answer the deep questions of the universe such as "where does wet food come from?" and "who are those cats in the mirror universe in the bathroom?" Two to five players take on the role of cat researchers proposing hypotheses. When you (and your co-authors) propose an experiment, you will roll some dice to "Do A Science" and find out the results.

ain Nor Snow Nor Lots And Lots Of Crabs

You are a crew of crabs. You desperately need to stop a particular package from reaching its destination, and the only way to do that is to illegally interfere with the postal system. 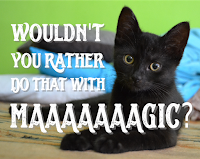 Wouldn't You Rather Do That With Maaaaaaagic?

A wizard wants to get their mundane chores done, but their familiar keeps trying to tempt them into using magic to accomplish their tasks.

Download Wouldn't You Rather Do That With Maaaaaaaagic? at itch.io 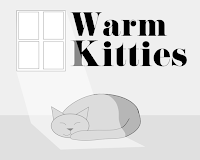 Warm Kitties is a two-player strategic game of cats fighting for room to nap in the sunshine. Claim moves to squeeze your cats into the best spaces and push your opponent out. Cats who end a round in the sunlight get warmer, but those stuck in the shade get colder. And be careful, because the sunlight moves over the course of the day! Whoever has the warmest kitties at the end of the day is the winner!

Kittens and Rainbows and _____

Kittens and Rainbows and _____ is a party game of nice things and inspirational quotes. Players take turns judging other players' suggestions for how to complete an uplifting saying. Would it be better to say "Always aim for the moon. If you miss, you'll land among the bubble baths" -- or would you rather "land among the big burly bearded men having a tea party"?

Download the print-and-play version of Kittens and Rainbows and _____!

Who's Your Heavenly Father?

In Who's Your Heavenly Father, players try to figure out which of ten facetious deities is the One True God, and then become virtuous in His eyes.

If the One True God is The Holy Algorithm, you'll want to pursue Justice above all else, perhaps by sticking to your newspaper's style guide even when the country is threatened by space aliens with strong opinions on the Oxford comma. But if the universe is ruled by God Galt, you'll need to be selfish. Maybe now you would reveal the local superhero's secret identity in exchange for a big pile of cash.

When Judgment Day rolls around, you'll find out who the One True God really was, and face His judgment. The most virtuous player will find themselves invited to the best seat in Heaven.

Download a print-and-play version of Who's Your Heavenly Father! In addition to the print-and-play files, you'll need a small envelope that can hold a single card, and a token to mark whose turn it is.