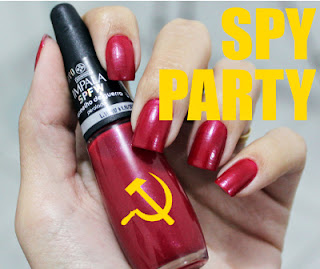 This year I decided to take a shot at Game Chef, a 10-day game design contest. This year the theme was "there is no book," and the ingredients (of which 2-3 should be included in your game) were absorb, wild, sickle, and glitter. My entry is titled "Spy Party."

Spy Party is a one-shot RPG in which players are communist (hammer and sickle) spies who have come to a makeover party in suburban Washington DC in hopes of exchanging intel with their undercover contacts. They must absorb fragments of knowledge from other players to figure out the USA's secret plans and weaknesses, while keeping up their cover of frivolous gossip and trying out glittery nail polish. Players paint each others' nails different colors to indicate levels of trust, while certain color combinations trigger in-game events. At the end, the colors of players' nails allow them to determine each others' fate (e.g. who is put on trial for espionage? Who is rewarded by your home country?)﻿

Posted by Stentor at 1:59 PM No comments:

Fiasco: YOU ARE A CAT

On a whim I created a Fiasco playset titled YOU ARE A CAT. We tried out a three-player game that went well.

Our story began with nearly-identical fluffy tortoiseshell cats Robin (male) and Arthur (female) stuffed into the same cat carrier on the way from the animal shelter to their new forever home. Their new human had intended to adopt Arthur, but due to a mix-up at the shelter, both cats had gotten put in the carrier. They arrive home and the human -- a single woman -- discovers that she now has two cats. Robin decides to act extra adorable to try to convince the human to keep him and not send him back to the shelter. He's in luck, as the human is unable to get through to the shelter on the phone to complain about the mix-up.

Arthur soon discovers a third cat in the house -- this one also a nearly identical fluffy tortie -- emerging from the dryer vent. The new cat introduces himself as Killer, Robin's future self come back to warn his past self against making a grave mistake. He demonstrates his future knowledge by telling Arthur not to eat a certain tasty-looking houseplant, as it is poisonous. The human discovers Killer and assumes he is Robin.

Later in the day, Arthur is curled up in the human's lap being adorable when Robin enters the room. Arthur tells Robin about Killer, but Robin is unconvinced. To try to prove Killer wrong, he eats a big bite of the tasty looking plant -- and immediately pukes all over the floor.

The next day, Robin is sitting in the human's lap while she does some work on the computer. He sees her log into something labeled "TOP SECRET HIGH SECURITY," and the screen shows "Nuclear Launch Code: password123." Robin bats at the keyboard, accidentally initiating the launch sequence, which the human quickly cancels and then shoos Robin off her lap.

Killer confronts Robin, explaining that he is Robin's future self come back from a terrible post-apocalyptic dystopia with a dire warning. Killer insists that Robin should forget all about the nuclear codes he saw. Robin denies this, and loudly proclaims "password123! password123!"

Arthur wanders by and overhears the nuclear code and asks Killer about it (though she can't remember whether it's "password 123," "password 456," or "password321"). Arthur completely believes Killer's story and becomes very concerned about what Robin might do with the nuclear codes.

That night, Robin goes back on the computer to research what "nuclear launch codes" are. He Googles a bunch of information about the Cold War, and -- lacking any knowledge of historical and geopolitical context -- becomes convinced that Russia is located just around the bend in the road that they can see from the front window of the house. He is also certain that Russia intends to attack and destroy them, and that Killer is a Russian double agent.

Killer offers to take Robin and Arthur around the bend to show them that it is not, in fact, Russia, and to convince them of the terrible fate that awaits them if they do not forget about the nuclear launch codes. They all slip out through the dryer vent and walk around the bend. They meet another cat, named Coby, who knows Killer. Robin accuses Coby of being a Russian agent and asks him how to spell his name in Cyrillic (to which Coby replies "spell?"). Robin sees a teddy bear inside one of the houses on the new street and takes this as proof that this is in fact Russia, since Russia's symbol is a bear.

Killer leads the other two cats through a crack in the fence into a junkyard in order to show them what kind of future awaits them. He kills a mouse, to show what they'll have to do for food after the nuclear war. Arthur is worried because the mouse has no sauce on it (unlike good wet canned food). Robin dismisses the concern, because he finds an old pizza box with cheese stuck to the lid.

Back at the house, Robin decides to launch a preemptive strike on Russia. He gets on the computer and starts logging in to the nuclear launch site. Just before he is able to enter the launch password, Killer chews through the computer cord, shutting it down. He runs away as the human -- hearing the ruckus -- comes downstairs to find Robin typing on a dead computer. She takes him upstairs and shuts him in her room to prevent further mischief.

Killer talks to Arthur about a more long-term solution to Robin's insistence on starting a nuclear war. They decide that they can get him in trouble by peeing on everything, since that is a male cat behavior. They pee everywhere in the house -- except in the bedroom where Robin is sleeping.

When the human comes out in the morning, she initially blames Arthur. However, Robin emerges and takes the pee as a sign that he should pee everywhere too. The human gets upset and takes both Robin and Arthur back to the shelter. The shelter personnel figure out that Arthur was the cat she meant to adopt, and they take Robin back.

In the end, Robin is given several rounds of gross medicine for his urinary "problem," but is then adopted by a new family. They do not have access to the nuclear launch system, but he discovers that "password123" gets him into their bank account, Amazon account, eBay, etc. With their finances ruined by Robin's meddling, they are forced to send him back to the shelter.

Arthur lives a nice life with the human. He overhears Killer telling Coby about how he tricked these other cats into believing he was from the future, and so Arthur drops a flower pot on him. The human discovers Killer and takes him to the shelter, where he is promptly adopted by a nice family.