For our one-shot RPG night this month, we played Death Takes a Holiday by Nick Wedig. I had played DTaH with Mr. Wedig at GenCon this summer, so I was eager to try it out with some new players.

In this game, the players are all members of the Boxmuller family, who were on their way to claim their inheritance from their eccentric uncle Hopewell Boxmuller when the boat they are taking to Perdido Island sinks. The players die, but then are offered a deal by Death himself. Death wants to take a little vacation. He'll allow the players to return to life as long as they take over his job, visiting people just before they die to release their spirit into the afterlife.

Our group had four players. I was Hal Boxmuller, a soldier on bereavement leave from the Vietnam War. With me were academic librarian (and repressed lesbian) Marcie Boxmuller and our two hippie cousins, Starchild and Morningstar Boxmuller. Upon finding ourselves returned to life in the graveyard on Perdido Island, we received a note from Death that said only "lobotomy." We made our way to the psych ward of the local hospital, where we found that head psychiatrist Dr. G had been giving everybody lobotomies -- far more than were necessary. He seemed to be doing something nefarious with the brain parts he was removing, but we weren't sure what. While looking around the psych ward, we found our cousin Greg Boxmuller about to pass away. We laid our hands on him and as his spirit departed, its last words to us were "the money is tainted."

We retired to our hotel, and the next morning Hal and Marcie each got up early and slipped off to the office of the lawyer who was to execute Uncle Hopewell's will. He shooed us away, informing us that the reading wasn't until the afternoon. We reconvened with Starchild and Morningstar and decided to stake out the lawyer's office from the vantage point of a sandwich shop across the street, to see if anything fishy was going on. Starchild decided to sneak around in the bushes, where he was able to see the lawyer arguing animatedly with Dr. G.

That afternoon, the four of us found ourselves joined by two dozen other Boxmullers for the official reading of the will. The will began "Whoever can find my money can have it." This set off a stampede, in which our Aunt Janice was killed. Her departing spirit said only "oh my, oh my, oh my" -- not a helpful clue. When the rest of the family was gone, the lawyer continued with the will, which also said "ask me for help."

We decided that with our special connection with Death, we might be able to talk to Uncle Hopewell at the graveyard. We went there and asked his grave what to do. Morningstar heard a voice telling her to dig up Hopewell's body, so we did. Upon opening the coffin, we found a note that said just "haha, I fooled you!" Hal got so upset he peed on Hopewell's body before closing the coffin again. But as we re-buried him, we noticed some numbers hidden in the fancy vines carved into Hopewell's gravestone. Hal recognized them (from his military training) as map coordinates. After a trip to the local library to look up maps, we determined that they led us to the psych ward at the hospital.

The psych ward was still bizarrely full of lobotomy patients. When Dr. G showed up, Marcie stabbed him with a syringe full of sedatives, and stuffed him into a straitjacket. When he came to, he came clean with us. It turns out that Dr. G was actually Uncle Hopewell in disguise. He had made his own bargain with Death, agreeing to provide the four of us with some practice deaths while selling the lobotomized brains for medical research. It was the brain scheme that was the real source of his fortune, not (as we had thought) his factory manufacturing old time radios. Unfortunately, since Uncle Hopewell was in good with Death, there was little we could do about his scheme. We left to continue our work for Death.

I really like this game's core mechanic. To decide what happens next, the player who is "the authority" draws a card from a special tarot deck and gives it to another player. Based on the card, that player offers a possible direction for the story. For example, we asked what we found when we dug up Hopewell's grave, and who else came to the reading of the will. After the first option is described, the card goes to a second player, who gives an alternate possibility. The person who asked the question then decides which possibility to go with, and passes the authority on to whoever's idea didn't get picked.

Our game got slightly confused when we realized we had turned it into a mystery -- but with no GM to define the mystery or keep the various clues consistent. Nevertheless, we managed to wrap it up in the end and have an enjoyable time. Death Takes a Holiday is definitely a game worth playing.

Posted by Stentor at 8:51 PM No comments:

In the few years I've been seriously working on game design, I've gotten to playtesting stage on around a dozen games. In the course of this, I've seen games tend to fall into four categories in terms of what the playtest feels like.

1. It's just broken.
The worst scenario -- the game just doesn't work at all in its current form. This can be heartbreaking when you've got a lot of attachment to the game idea, but it simply doesn't work in practice. I had put a lot of effort into The Fall of Greenland, a "deck destroying" (like deckbuilding in reverse) game with a viking theme. It ended up simply not being fun. I did three or so playtests, trying to massage the rules, but in each case it fell into the same trap: each player's turn was a small puzzle-solving exercise (half of the time obviously impossible). There wasn't anything in the way of longer-term strategy, or even short-term tactics. And the player interaction that was supposed to enrich the game was unmotivated. Usually the only thing you can do in such a case is toss the whole thing out. I'm still attached enough to the idea of a viking-themed deck destroying game that I'm not throwing it out yet, but I know it's going to need a fundamental rethinking of all of the core mechanics to turn into anything playable.

2. Churning Your Wheels.
On the first try, the game doesn't work. So you change some significant things -- and now it fails in a new way. You change it again, and it finds yet another way to fail. This was my experience for a while with Dinosaur Hunter, a mod of Monopoly in which Atlantic City is overrun with dinosaurs. The mechanic for moving the dinosaurs went through at least four different iterations before I finally hit on something that was quick, interesting, and strategic, while also affording enough movement in the dinosaurs to make hunting them and protecting your citizens both worth it. So games in the wheel-churning situation can be improved, but it's a very frustrating experience. Wheel churning can also set in later in the playtesting, in which case it can be even more frustrating. You've got a basic idea that pretty much works, but you're not quite hitting on the changes that you need to make it all come together. When you've put in that much work, it's hard to walk away.

3. The Hole in One.
This is the kind of playtest we all hope for. You play the game for the first time and it just works. It's fun, it's balanced, it keeps everyone engaged. This is what happened with my current top project, Warm Kitties. After the first playtest, the only changes I made were to shrink the board by a couple rows, and to make a new physical mechanism for the worker placement system (which didn't change the game mechanics or strategy, just eliminated annoying upkeep tasks). But I placed this type of playtest third, rather than last, because it can be deceptive. The game works so well that you assume it's all locked down. You stop looking at ways to improve it because it seems fine as it is. With Warm Kitties, for example, it took me a long time to actually implement the shifting light and shadow that playtesters had been suggesting to me from the beginning, because the game worked just fine without it.

4. The Steady March
The most satisfying kind of playtest is the steady march. The game may start out broken, or boring. But with each iteration, you can feel the improvement. Each time you play, it gets more fun. That's the situation with the current main project of my game design partner Jasmine, called Cool Table. There were too many pieces on the board, so we eliminated some and it worked better. The card-selling mechanic encouraged hoarding, so we switched to getting money for forward movement -- solving both the existing problem and another problem of over-focusing on a few pieces. You get more excited about working on a game and playtesting it a lot when you can feel the improvements actually happening.

Posted by Stentor at 8:21 PM No comments: 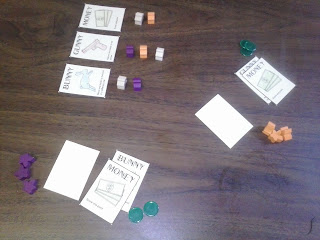 Posted by Stentor at 8:02 PM No comments: