Not every game problem can be solved with game mechanics

I think board game designers would learn a lot from playing a few rounds of Fiasco.

Fiasco is a story-focused one-session roleplaying game, in which you collaboratively tell a story about a wacky heist gone bad. In various sessions I've been a tea importer who dressed up as a mall Santa to destroy my competition, a cat who tried to convince the other cats to start a nuclear war with Russia, and a severed hand trying to stop my brother's clones from winning a bowling competition.

The key thing about Fiasco is that there is no win condition. By the rules, no individual can lose, nor can the group as a whole lose. Certainly there are end conditions, which determine whether your character's life turns out good or bad at the end of the story -- but it would be dysfunctional and counterproductive to the game for someone to treat those as "win conditions," organizing their approach to playing the game around achieving a specific sort of ending for their character. The rules of the game exist to support a group of people in doing something fun together.

Too often, I think that board game designers become fixated on the mechanical aspects of games. Don't get me wrong -- having solid mechanics in a game is essential. It's important to think about what kind of strategies your mechanics make possible and reward, and to adjust them if they produce dysfunctional results. But there's a limit to how much game mechanics can do. Not every problem in a game can be solved through game mechanics. If we get fixated on the idea that any undesirable strategy must be prevented or severely disincentivized within the mechanics of the game, we can lose sight of the larger picture.

A classic example of this issue is the problem of "captaining" in cooperative games -- the phenomenon of one player taking over and directing other players' moves, creating an essentially solitaire game. There are some cooperative games that inherently rule out captaining, as a natural consequence of their core gameplay (Hanabi does this beautifully). Others tack on rules to try to exclude captaining by fiat (e.g. forbidding players to explicitly name the cards in their hand, as in Shadows Over Camelot). But I've had an enjoyable time playing actual solitaire games of Pandemic and Forbidden Island -- something that would be impossible if they were mechanically captain-proofed. And I've had fun playing them with people I trusted not to captain, in social contexts that discouraged captaining. We didn't need something in the rules to force us to play nice.

Different groups will play the same game in different ways. The designer can't, and shouldn't, exercise complete control over the gameplay experience. A big part of playing most games is the informal social negotiation that occurs around the question of which strategies are legal but jerky. For example, in a recent game of Keyflower, we agreed that while it was legal to win two turn-order tiles (thus getting two ships and leaving another player with none), that it was kind of a jerk move and would be treated as such. When one player proceeded to bid on two turn order tiles, the rest of us stepped up to stop him, even when it might not have been a strictly optimal move in terms of maximizing personal victory points. We were all invested in maintaining the spirit of the game. (I should add that the person bidding on multiple turn order tiles wasn't doing it to be a jerk -- the move was taken, in context, as a sort of teasing.)

Bringing this back to Fiasco, someone could be a jerk in Fiasco. They could refuse to go along with the story, they could nitpick the allocation of white and black dice at the ends of scenes, or they could simply "check out" during the game. I've had all these things happen, and they make the game less fun. There's nothing in the rules that prohibits this kind of behavior.

The overarching goal in playing a game -- even more than racking up victory points -- is having fun together. And no game mechanic can guarantee success at that.

Posted by Stentor at 7:30 PM No comments:

Updated Fiasco: You Are A Cat playset 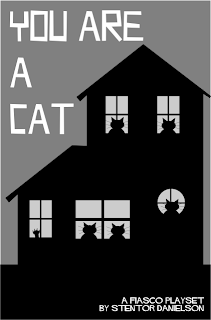 I finally figured out the correct fonts and made a cool cover image for You Are A Cat, my Fiasco playset about being a cat. Download it here!
Posted by Stentor at 11:35 AM 2 comments: