The Warren: Bunnies and Cane Toads

I had the opportunity to playtest The Warren, a Powered by the Apocalypse game based on one of my favorite books, Watership Down. Our group consisted of myself, two adults, a 16-year-old, and a 10-year-old. 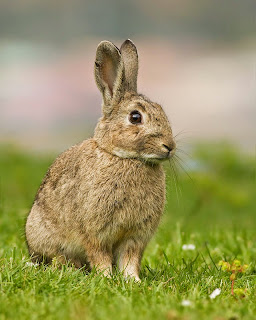 The only instruction I gave the group about the setting was that I wanted the game to be set in Australia. Based on my questions, the players decided that the warren is a fairly small one. It is run as a theocracy, ruled by the priests of Moloch -- the god of the underworld and plentiful food. It was founded by Flopsy, a house rabbit whose humans watched a lot of religious programming such as "The 700 Club." The warren is small and has few allies because of its obnoxious proselytizing, but it is blessed with plentiful food. The current head priestess, Dairy Queen, is very elderly and rarely leaves her room.

Our Player Characters were:

I did a lite version of the Ganakagok setup rules to flesh out the setting. Each player added a location to the map of the warren and its surroundings, and an NPC that they had some relationship with. This got us a large food storage room and a back door on the warren, and the people's house where Flopsy came from, which is separated from the warren's territory by a river the rabbits call "Jordan."

When our story begins, the PCs, along with NPCs Ash and Dusty, are out feeding in a meadow north of the warren. As they graze, they hear some noise from just over the ridge. Thump-tor Pays Attention with his hearing, but hears nothing. Muddy also Pays Attention, with his smell, and smells cane toads! Cane toads are bad news for rabbits, so he runs back toward the warren along with Ash. Veggie-mite tells the others that the cane toads are friends of the warren. They have a secret trade relationship with the warren, supplying toad poison (used by the priests as a hallucinogen in rituals) in exchange for food. Belladonna Pays Attention and determines that Veggie-mite is telling the truth. 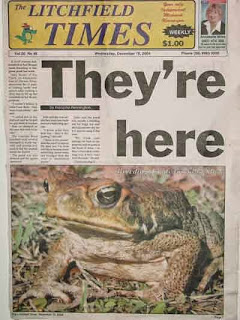 The four remaining rabbits peek over the ridge and see that there are 20 cane toads marching by -- many more than they have ever seen before. All three get partial successes at Resisting Panic. Veggie-mite doesn't recognize any of the toads. Nevertheless, she calls out to them. They see the rabbits and quickly surround them. Belladonna decides to Bolt, and makes it away before the toads get her.

The toad leader identifies herself as Hopper and demands to know what the rabbits are doing on their land. Veggie-mite asks about the trade agreement between the rabbits and toads. Hopper replies that that agreement was made with the Slimy Clan, who are now slaves -- and the rabbits will likewise be made slaves. Veggie-mite Speaks Plainly to them to try to convince them to back down. They offer her a deal -- if the Queen will meet Hopper in the meadow in one week and officially sign over the northern half of the warren's territory to the toads, they will allow the food-for-drugs deal to resume. Veggie-mite agrees in order to get the toads to let them go.

Muddy gets back to the warren and meets Buck-tor, who is on guard duty. He starts talking about cane toads. Buck-tor panics, thinking the toads have gotten inside the warren, and orders everyone to evacuate -- the opposite of Muddy's intent. Muddy Speaks Plainly to get him to calm down. Just then, Belladonna arrives. They all go to talk to the Queen about the cane toads. Buck-tor has to duck behind the curtain covering the Queen's room to wake her up several times, but they eventually get their message across. The Queen replies that the toads are friends of the warren and there is nothing to be afraid of.

The next day, Ash calls a meeting of the whole warren to decide what to do about the cane toads. Veggie-mite Speaks Plainly to spread a rumor that the Queen has had a vision that everything will work out fine. Muddy Pays Attention to discover that the rumor is false. He encourages Ash to not buy into it. Ash agrees, and announces his own plan: the rabbits have been living infear of the toads for too long. It's time to attack! He brings Dusty onto the stage to show off his latest discovery. Dusty holds up a strange metal object that he found, and explains that the humans call it a "gun." He insists that he has researched it thoroughly, and the gun will give the rabbits the power to destroy the toads. Belladonna realizes this is why Dusty hasn't been around much the last few days, and it explains the loud "bang" everyone heard the previous day. Veggie-mite Pays Attention and discovers that Dusty doesn't quite understand everything about the gun, despite his claims.

Veggie-mite proposes an alternative plan: The rabbits should abandon the warren and move back across the Jordan River to the homeland of Flopsy.

As the meeting breaks up, with most rabbits uncertain what to do, the PCs meet to discuss what to do about Ash and Dusty's gun plan. Muddy wants to run off to try to talk to Ash (as he feels betrayed by his littermate), but Thump-tor sits on him. Muddy fails to Struggle free. They decide that they can't let the gun be used, as it might hurt a rabbit or cause an all-out war. They plan to steal it and bury it somewhere.

That night, they send Belladonna into the room where Dusty and Ash are sleeping. She attempts to Sneak the gun away from Dusty, but he wakes up and demands to know what she's doing. She convinces him that she just wants a chance to try the gun for herself. They agree to meet in the meadow the next morning for a gun practice session, before Ash and Dusty lead their supporters in an assault on the toads.

The next morning, our PCs are approaching the meadow when they hear a loud bang. Muddy and Belladonna successfully Resist Panic, but Veggie-mite and Thump-tor lose it and let out a scream. Belladonna Pays Attention and discovers that Ash and Dusty heard the screams but didn't know what they were. So she rushes up to the meadow to claim credit for having screamed, while the other three successfully Sneak into the bushes to wait for their chance to help steal the gun.

Dusty demonstrates the gun, holding it to his chest and pulling the "activation lever" with his paw. He shoots an apple that Ash had set up on the other side of the meadow, turning it into applesauce. Then he helps Belladonna hold and aim the gun. She successfully Resists Panic at holding such a powerful object in her paws. She attempts to aim the gun wrong (custom move on Strong), but fails and hits the apple perfectly. The recoil causes her to drop the gun, and Ash and Dusty pull her over toward the target to show her how good she did.

Muddy takes this opportunity to Bolt into the meadow and grab the gun. Veggie-mite and Thump-tor also bolt in to try to run interference on Ash and Dusty. Muddy successfully picks up the gun (custom move on Strong, because he's a runt) and Bolts from the meadow carrying it.

Thump-tor successfully stops Dusty and Ash from pursuing Muddy (custom move on Strong). Veggie-mite tries to Speak Plainly to them to convince them that going after the toads with the gun is a bad idea, but fails. She ends up leaving them with the impression that the priesthood intends to use the gun itself, to keep the younger rabbits from getting the glory. Thump-tor tries to Pay Attention to the conversation, but it all goes over his head -- just politics mumbo-jumbo. Instead he just sits on Ash (custom move on Strong) to keep him from pursuing Muddy. Belladonna Speaks Plainly to Dusty, and convinces him that she'll retrieve the gun and return it to him.

On his way back past the warren carrying the gun, Muddy encounters a group of five cane toads. He is unsuccessful at Resisting Panic, so he drops the gun and it goes off. Thump-tor and Veggie-mite successfully Resist Panic at the unexpected gunshot, but Belladonna (on her way to find Muddy) does not, and dives into a bush.

The noise attracts the toads, who converge on Muddy. He Bolts, getting away and hiding alongside Belladonna, but leaving the gun behind. Our session ended with Belladonna and Muddy watching the cane toads pick up the gun and carry it away.